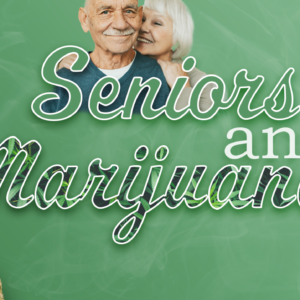 Today is the 20th of April which is recognized as national marijuana day around the world. This green plant has been becoming legalized in many states, like Illinois, left and right recently. People use it recreationally, some use it as a replacement for over-the-counter medicines, and some have to use it because of a certain ailment or disease they may have. Many seniors grew up with marijuana being recognized as an illegal drug with zero benefits coming from it, but we’re here to educate or re-educate you about the new world of medical marijuana.

Firstly, let’s hit the basics and teach the people who don’t really understand fully what marijuana actually is. According to the CDC, “Marijuana, which can also be called weed, pot, dope, or cannabis, is the dried flowers and leaves of the cannabis plant” (CDC). Weed is just a plant the grows out of the ground like most flowers, plants, the vegetables in your garden, etc. The plant itself contains many compounds, but the two main compounds are THC (tetrahydrocannabinol) and CBD (cannabidiol) which are different in their own ways.

Before we hop into the nitty-gritty details of the compounds in marijuana and their effects, let’s talk about the overall shift of the stigma revolving around this topic. In the time period from 1900 to the late 1980s marijuana was extremely frowned upon and was labeled as destructive to the human body/mind. It was then banned all over the world, misled by false information, and was a huge part of the war on drugs in earlier times.

Fast forward to the great year of 1996 California became the first state to legalize medical marijuana to help people with severe sickness or disease. Then just 2 years later Oregon, Alaska, and even Washington hopped on board with California to legalize medical marijuana. From 1998-2012 twelve states legalized medical marijuana and four states decriminalized marijuana. Sounds like a complete shift in the tide, doesn’t it? But it doesn’t stop there. The public started to get facts from medical professionals and the reaction from the majority of the public was shockingly fantastic. Which then leads to the wave of recreational legalization in the early to late 2010s.

Now, in today’s day and age, sixteen states have legalized recreational cannabis (including Illinois), twenty-six states have decriminalized it (laws vary), and medical marijuana is legal in thirty-six states. Proving the point that the reducing stigma of marijuana has been happening more as time moves forward.

The Chief Medical Correspondent, Dr. Sanjay Gupta for CNN stated this about marijuana, “We have been terribly and systematically misleading for 70 years in the United States, and I apologize for my own role in that”. Sanjay Gupta wrote on CNN’s website. A physician once famous for his outspoken opposing views of cannabis was now saying that cannabis has “very legitimate medical applications. In fact, sometimes [cannabis] is the only thing that works” (Shen).

Showing that seniors in the world were extremely misinformed and mislead by media back in the day. Marijuana is starting to be accepted by more and more people daily because it provides multiple benefits for a multitude of reasons, especially for the senior community.

Now let’s get into some brief details about what’s actually in marijuana.

Now, you may be wondering to yourself, “What are the differences between CBD and THC”? Each of them has its own benefits and effects on the human body and the mind.

Let’s start with tetrahydrocannabinol, or THC for short, which is the compound in marijuana that more people seem to be familiar with. This is the part of marijuana that causes psychological effects, keep in mind that these effects aren’t permeant, it’s only temporary and lasts only a couple of hours on average after usage. According to Alina Bradford from LiveScience.com, she states about THC, “On average, the effects last about two hours, and kick in 10 to 30 minutes after ingestion.” (Bradford). So basically, THC gives you a euphoric experience for a couple of hours followed by a serious case of the munchies (where you eat an excessive amount of food in a sitting). But keep this in mind and we can’t say this enough, DO NOT DRIVE at all during or two to three hours after your marijuana consumption.

The other compound in marijuana is called cannabidiol, or CBD for short, which is the other prominent compound within a marijuana plant. This is the compound that more people seem to be unsure about and want to learn more as to how’s different from its close cousin THC. Let’s get something straight first, according to Peter Grinspoon from Harvard Health, he states, “While CBD is a component of marijuana (one of the hundreds), by itself it does not cause a “high” (Grinspoon). So this compound does not affect you at all psychologically as THC does, that’s why you see more CBD advertisements and products in public now. You can buy just CBD products that don’t include THC as well, to provide benefits without the worry of psychological effects.

What benefits does medical marijuana bring to the table for seniors?

The Many Forms of Marijuana

THC can come in many forms, and CBD can come in its own separate forms as well which provide a variety of different options for seniors who aren’t comfortable just smoking it.

Here are some of the forms that THC and CBD (marijuana) can come in:

How can you get marijuana?

Well, just in Illinois there are many medical and recreational marijuana dispensaries, click here to see all the dispensaries in this state. You could also just ask or talk to your doctor about where you can purchase marijuana. If it’s still illegal in your state, you’ll have to get a medical marijuana card from your doctor to purchase the product. Medical marijuana can be very helpful for the senior community as a whole and the stigma for this green plant is only going to keep reducing. Giving the senior community aid with less expensive and less addictive features for any pain relief, disease, sickness, or other ailments.

Get product updates, news, promotions, and much more!

Sign up for our monthly newsletter to learn more about aging in place.